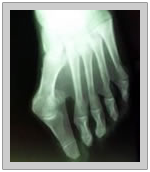 Bunions are one of the most widely spread pathologies of the foot. They are characterized by a deformity of the big toe, which involves a lateral deviation of the falangia, and the dislocation of the sosamoid bones, two small bones in which you find at the joint of the big toe. In general this deformity is accompanied by a painful swelling on the insidhallux valguse of the foot, and the so-called “onion” (bunion), which does not take the shape in the formof anabscess, but inflammation, which is from the footwear rubbing against it.

The deformity of Bunions is often associated with flat feet, in which the arch of the foot is overloaded in an exaggerated way to the back part of the foot and which causes other skin problems (calluses, ulcers) which we have already seen, also the deformation of the second and third toes, defined as hammer toe an additional consequence like osteoarticolari lesions on the forefoot often with grave repercussions to the knees, hips and the spine.

The majority of people who suffer from Bunions are women (ten times more than men), in general at a mature age or old age, and the major part are hereditary cases.

THE CLINICAL OUTCOMES are made up of problems localized in the area of the feet with repercussions in the alignment of the posture. In patients affected by Bunions the deformity is created by the deviation of the head of the first metatarsal, which moves to the outside of the foot and simultaneously upwards.

LOCALIZED CONSEQUENCES degeneration of the joints and abscesses. The metatarsal joint becomes disalligned an in turn finds itself working in an asymmetrical way that involves the cartilage in which the inflammation is the cause of pain and degenerative osteoarthritis.

The prominent metatarsal rubs against the footwear and causes the formationhallux valgushallux valgus of annoying bunions, which impede the use of normal footwear.

Metatarsalia the raising up of the back of the head of the first metatarsal which under normal conditions supports double the weight in respect to other metatarsals. Causing the structural raising of the forefoot, creating a rising up of the second and third metatarsals with the appearance of pain and calluses on the sole of the foot.